NEWS RELEASE – January 15, 2020 – Chamber of Marine Commerce President Bruce Burrows today unveiled a 2020 wish list for legislative and policymakers to support the growth of Great Lakes-St. Lawrence and coastal shipping with climate resiliency to deal with high-water levels as a top priority.

Overall cargo on the St. Lawrence Seaway totaled 38 million metric tons in 2019, a decrease of 7% attributed to trade conflicts, challenging navigational conditions due to high waters and adverse weather impacts on key cargoes such as grain.

“The challenges of the 2019 shipping season underline the critical importance of protecting the future integrity of the Great Lakes-St. Lawrence waterway as a reliable and efficient trade and transportation corridor for the United States and Canada,” said Bruce Burrows, President of the Chamber of Marine Commerce.  “High water levels are negatively impacting residents and businesses, including the marine shipping sector that transports cargo through the St. Lawrence Seaway, and we need to work together with the International Joint Commission and governments to conduct a proper study into water levels and their causes, and to develop a resiliency plan that can address stakeholder needs into the future.”

Pressure on the IJC’s International Lake Ontario-St. Lawrence River Board, to lower Lake Ontario levels by raising water outflow at the Moses-Saunders dam to unsafe navigation levels that would have shut down Seaway shipping, continued throughout 2019.

Marine shipping worked diligently with stakeholders for a solution to ensure safe navigation at record outflow levels for five months last year to help lower the Lake, taking on 26 mitigation measures that caused shipping delays, lost cargo business and millions of dollars of extra operating costs. The Chamber also supports the River Board’s recent actions to increase outflow levels at the dam during the winter, in order to lower Lake levels as much as possible before Spring.

Burrows added: “We would also like to see commercial navigation interests as members of the International Lake Ontario-St. Lawrence River Board to work alongside recent appointees representing community interests. Many different industries including agriculture, manufacturing, fuel supply, construction and the mining sector depend on the Great Lakes-Seaway transportation system, supporting 238,000 jobs and USD$35 billion (Cdn$45.4 billion) in economic activity in Canada and the U.S.”

The Chamber will now be urging the Canadian government to form a ‘National Advisory Board’ to gain stakeholder input into the ongoing reform of policies and supporting regulations. Our priorities will be to have policy makers review pilotage requirements (such as double piloting or mandatory zones) while taking into account the many technological advancements over the past 40 years.  We would also like to see improvements made to the pilot certification programs, which allow domestic ships’ masters and senior navigation officers to pilot their own vessels. It is important for the focus of these programs to be on onboard training and evaluation and that they be as efficient as possible. 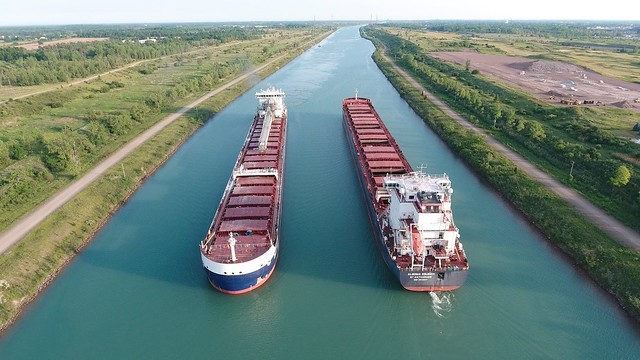 About the Chamber of Marine Commerce

The Chamber of Marine Commerce is a bi-national association that represents more than 130 marine industry stakeholders including major Canadian and American shippers, ports, terminals and marine service providers, as well as domestic and international ship owners. The Chamber advocates for safe, sustainable, harmonized and competitive policy and regulation that recognizes the marine transportation system’s significant advantages in the Great Lakes, St. Lawrence, Coastal and Arctic regions.